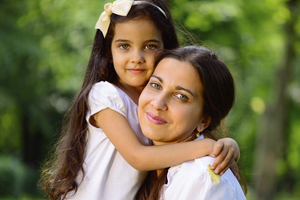 Children raised by a single parent are no less happy than those living with two biological parents, a study has found.

Researchers from NatCen Social Research found family composition has “no significant effect” on the happiness of children. Rather, it is the quality of relationships at home which are most strongly linked to a child’s well-being.

The results challenge the popular conception that children in two-parent families are more likely to be stable and content than those raised in “broken” homes.

The seven-year-olds were asked the question: “How often do you feel happy?”

Of the children living with a lone parent, 36 per cent said they were happy “all the time” while the remaining 64 per cent reported being happy “sometimes or never”.

Exactly the same percentages were recorded when the question was put to children from the other family types.

The results were largely unchanged when other factors which could influence a child’s well-being – such as their parents’ social class or the affluence of the area in which they live – were taken into account.

Jenny Chanfreau, a senior researcher at NatCen, said that a “happy, harmonious family dynamic” was crucial for child happiness, adding: “It’s the quality of the relationships in the home that matters, not the family composition.”

Ms Chanfreau told the British Sociological Association’s annual conference in Leeds: “Getting on well with siblings, having fun with the family at weekends and having a parent who reported rarely or never shouting when the child was naughty were all linked with a higher likelihood of being happy.”

The study’s findings contradict previous research which indicates that family division is likely to have a detrimental effect on children.

One 2008 report, based on figures from the Office for National Statistics, claimed that children whose parents had split up were four and a half times more likely to develop emotional problems than those whose parents had stayed together.